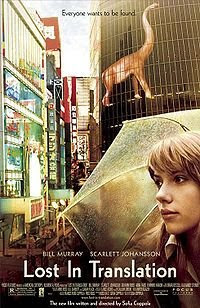 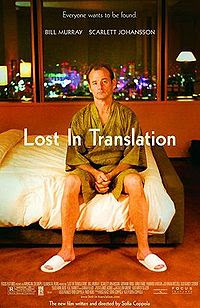 Ok, this has been troubling me for a while now. I finally got round to watching Lost In Traslation a couple of weeks ago now. I fully realise that it's taken me a while, and that I'm not bang up to date with my movies. But there you go.
So I enjoyed the movie. Thought both Bill Murray and Scarlett Johanssen were excellent. I'd liked Sofia Coppola's only other film The Virgin Suicides too.
Prior to watching Lost in Translation I'd never read any reviews and during its release was obviously blissfully aware of any hype surrounding it, so I just took it as it came.
Anyhow, over the last week or so I kept thinking about the whisper......

For those of you who haven't seen the movie, look away now, as they say.

Those of you who have know exactly what I'm talking about.
So tonight I'm thinking about it.....the whisper that is. And I decide to google 'Lost in Translation'.
And what comes up? ...... about 45 million pages for 'the whisper'.
It wasn't just me then! Sofia Coppola obviously knew what she was doing.
I never read any of them, so I'm still in the dark......


But I just wanted to ask anybody else who might be in a position the same as I'm in..... what do you think he whispered to her?
Posted by Neil Tasker at 23:04