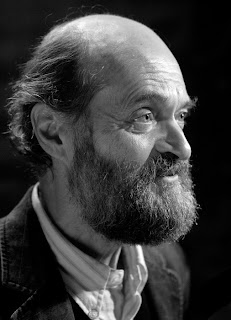 I went you Tube searching for this piece of music... It's Arvo Part's Spiegel Im Spiegel, a piece of music which sends shivers down my spine.
Part wrote this piece in 1978. He was born in Estonia but moved to Austria and ultimately Germany. He was responsible for the style of music he called Tintinnabuli.
"Tintinnabuli is the mathematically exact connection from one line to another.....tintinnabuli is the rule where the melody and the accompaniment [accompanying voice]...is one. One plus one, it is one - it is not two. This is the secret of this technique." - from a conversation between Arvo Pärt and Antony Pitts recorded for BBC Radio 3 at the Royal Academy of Music in London on 29 March 2000, as printed in the liner notes of the Naxos Records release of Passio.
During the hunt I came across several pretty picture videos which were ok...... you know... just ok.
Now I'm no big fan of ballet or 'the dance'.... can't really make head nor tail of it, if I'm honest. But I liked this. If you have 5 minutes to spare, fill your brain with this... and let me know what you think.
Posted by Neil Tasker at 21:18