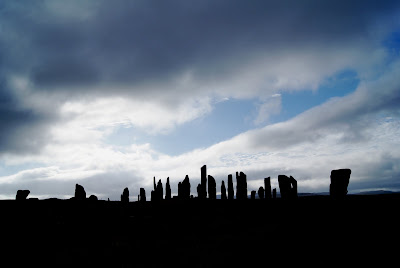 This was something of a pilgrimage for me. I've wanted to see these stones for more years than I care to remember. To make the visit with my 12 year old daughter made it even more special.


The Callanish (Calanais in Gaelic) Stones have been standing since 2900 BC.


Puts it into perspective a bit. 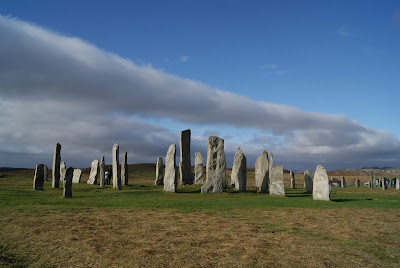 Situated on the west coast of Lewis, these stones are made of Lewisian gneiss. Dontcha just love the way 'Lewissian gneiss' just trips off the tongue. I can't get it out of my head. (As ELO once said). 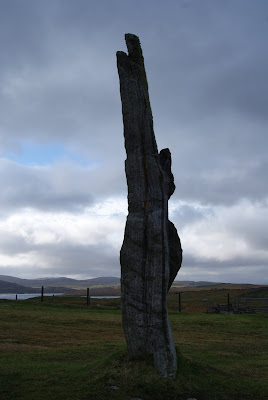 Construction of the site took place between 2900 and 2600 BC, though there were possibly earlier buildings before 3000 BC. A tomb was later built into the site. Debris from the destruction of the tomb suggests the site was out of use between 2000 BC and 1700 BC.[1] The 13 primary stones form a circle about 13 m in diameter, with a long approach avenue of stones to the north, and shorter stone rows to the east, south, and west (possibly incomplete avenues). The overall layout of the monument recalls a distorted Celtic cross. The individual stones vary from around 1 m to 5 m in height, with an average of 4 m, and are of the local Lewisian gneiss. 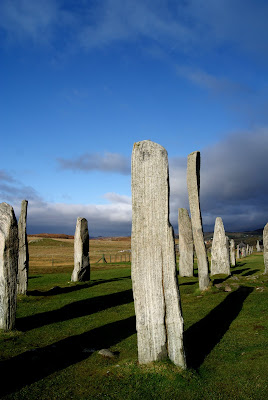 We stayed for about an hour, my daughter wandering around with the dog, me clicking away like a madman. We timed the visit pretty good in that the weather changed quite dramatically and we had the place pretty much to ourselves. 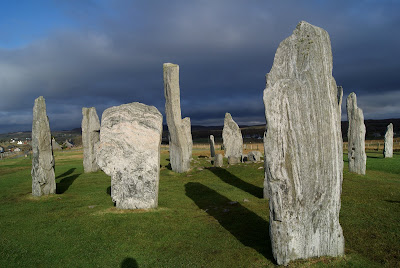 The first written reference to the stones was by Lewis native John Morisone, who in c. 1680 wrote that "great stones standing up in ranks [...] were sett up in place for devotione".
The tallest of the stones marks the entrance to a burial cairn where human remains have been discovered. An excavation campaign in 1980 and 1981 showed that the burial chamber was a late addition to the site, and that it had been modified a number of times. Pottery finds suggested a date of 2200 BC for the erection of the circle. It has been speculated, among other theories, that the stones form a calendar system based on the position of the moon. Professor Alexander Thom suggested that the alignment of the stone avenue (when looking southward) pointed to the setting of midsummer full moon behind a distant mountain called Clisham.
Critics of these theories argue that several alignments are likely to exist purely by chance in any such structure. In addition many factors such as the weathering and displacement of the stones over the millennia mean we can never be certain of any original, possibly intentional, alignments. 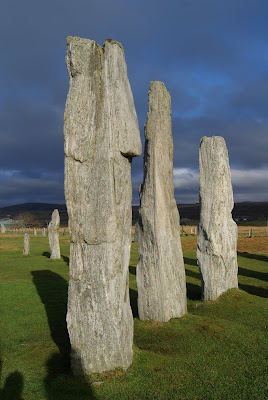 Confirming our good fortune, as Fiona, Molly (the dog) and I rested on a bench coming down the hill, a busload of American tourists started to pass us by on the way up to the stones. There must have been forty of them. Nothing against tourists or Americans (in fact they all took a delightful interest in the dog), but it would have altered the experience quite profoundly if we'd been an hour later. 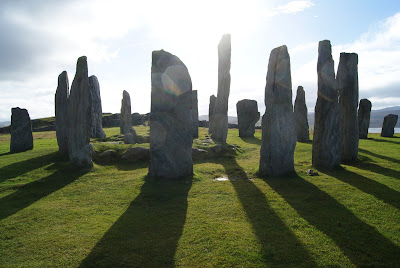 ....... I can imagine the place being packed with nutters at the summer solstice......
Again Wikipedia states......
Local tradition says that giants who lived on the island refused to be converted to Christianity by Saint Kieran and were turned into stone as a punishment. Another local belief says that at sunrise on midsummer morning, the "shining one" walked along the stone avenue, "his arrival heralded by the cuckoo's call." This legend could be a folk memory recalling the astronomical significance of the stones.

.......But I'd reeeeaaaally like to be the only one up there on Midsummers night to watch for the 'shining one' and listen out for the cuckoo......