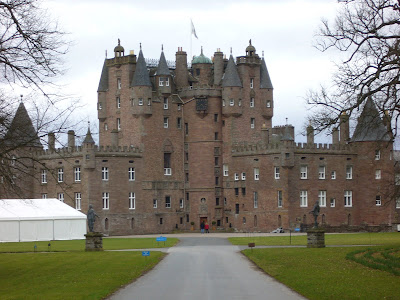 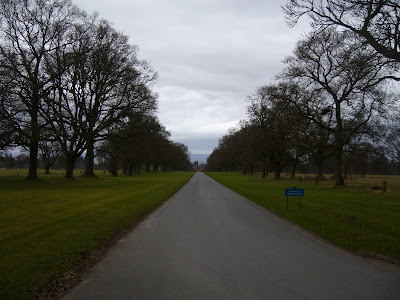 This is the first in a series of photos of Glamis Castle. It lies about five miles to the east of Forfar. I took a drive out there last Sunday on the off chance that it was open and it turned out to be the first day of the season, so I timed it perfectly. The castle is the home of the Earl of Strathmore but is probably most famous for being the birthplace of the Queen Mother. I should perhaps point out at this stage that I am by no means a Royalist or an admirer of our landed gentry, however I do like a good castle and whilst I may despise what goes on in and around them, I'm not about to let a little thing like that get in the way of a good photo opportunity.
Over the next wee while, I'll be posting more pics and try to give a flavour of the castle and its environs.
The bottom pic shows the 'drive', a tiny bit grander perhaps than the drives us mere mortals are used to. I reckon it must be over half a mile long. Put it this way, I don't fancy doing the round trip in my baffies to pick up the milk and papers every morning. If you click and enlarge you can see the castle in the distance.
The top picture shows what you arrive at after the stroll down the drive. God knows who put that stupid bloody marquee there, ruins a good pic.
They charge unsuspecting tourists £8.50 to get in, but being a local I claim aristocratic immunity and I just drove down and parked my clapped out Peugeot at the front door. I figure that the £8.50 is better of in my pocket than the Earls...... he'd just drink it anyway!