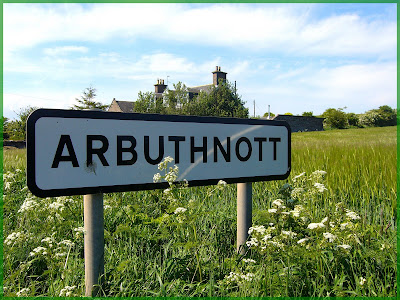 And so to Arbuthnott, the heart of Sunset Song country. This is where the author Lewis Grassic Gibbon was born and raised and much of the novel is centred around this area. 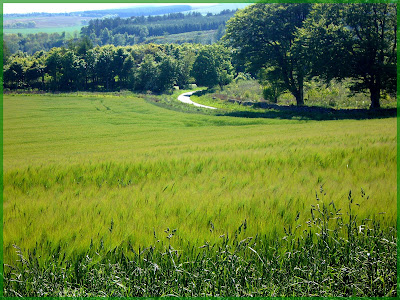 This is the view directly across the road from the signpost above. When I first looked at this photo I thought it was out of focus, but it's the soft effect of the barley which tricks your eye.
There seems to me to be an increase in the growth of barley this year. It's everywhere. A welcome return and a nice change from the incessant fields of rape which have replaced much of the traditional crops recently. 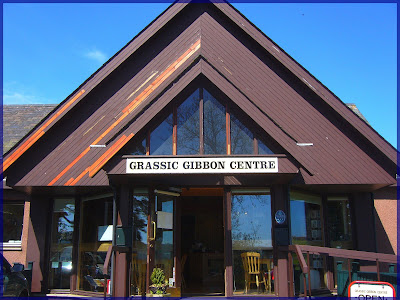 The little centre dedicated to Gibbon. As you'll see, it was jam packed the day I came....... 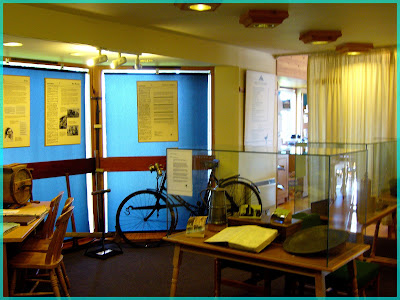 Well ok, I was the only visitor.... I loved the wee sign on the bike which ran along the lines of ... 'This is a bicycle similar to one which Gibbon would have rode......' Fair enough! 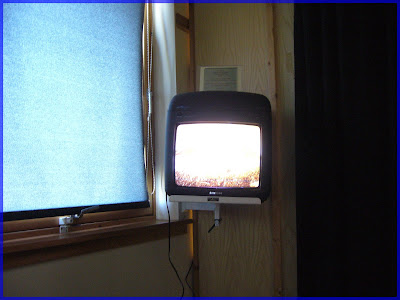 The curator/manager/coffee maker offered to put a video of Gibbon on for me and ushered me into this little room/cubicle. He drew the curtain and I settled down in comfort to watch the show...... Note the 56 inch widescreen plasma job. DVD hasn't quite made it up here yet..... it was a VHS. 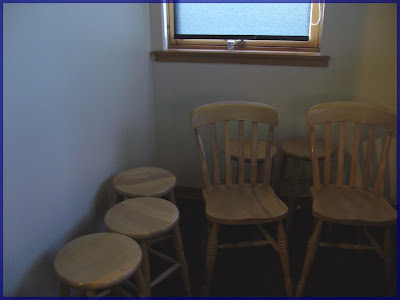 A range of comfortable chairs was provided, I chose one with a back. A box of tissues was thoughtfully left on the table, no stone was left unturned in an effort to ensure the complete satisfaction of the visitor. I was hugely impressed. 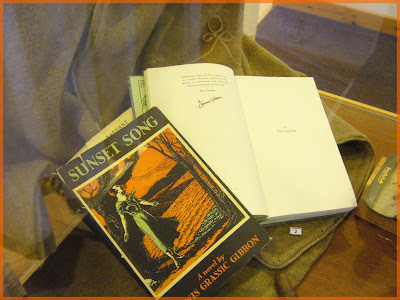 All that paled into insignificance however when I caught sight of this signed first edition of Sunset Song. A fitting end to my day in the Mearns.
'So Chris put on the best frock that she used for Sundays, and her tall lacing boots, and prigged out her hair in front of the glass in the parlour, and went up across the hill by Blawearie loch, with the night coming over the Grampians and the snipe crying in their hundreds beyond the loch's grey waters - still and grey, as though they couldn't forget last summer nor hope for another coming.
The Standing Stones pointed long shadow-shapes into the east, maybe just as they'd done of an evening two thousand years before when the wild men climbed the brae and sang their songs in the lithe of those shadows while the gloaming waited there above the same quiet hills. And a queer, uncanny feeling came on Chris then, she looked back half-feared at the Stones and the whiteness of the loch, and then went hurrying through the park paths till she came out above the kirkyard and Manse. Beyond the road the Miekle House rose up in its smother of trees, you saw the broken walls of it, the flagstaff light was shining already, it would soon be dark.'
Lewis Grassic Gibbon 1901-1935 from Sunset Song.