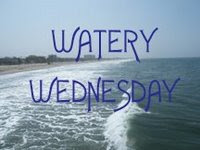 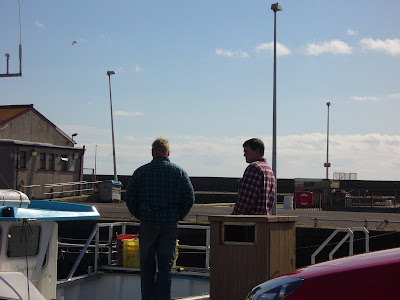 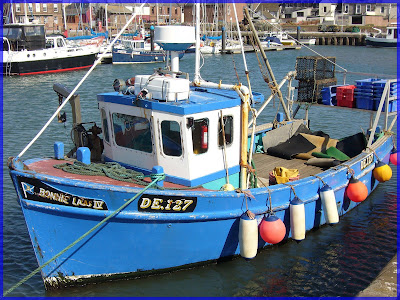 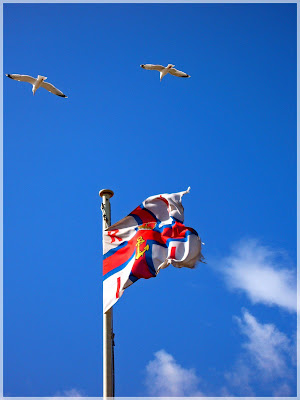 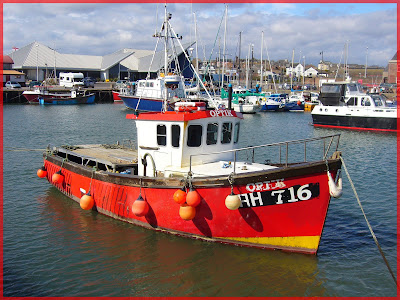 Took my lunch down by the harbour in Arbroath today. It was bright and cheerful but still that chilly sea breeze. I like these old style fishing boats much better than the modern boring yacht type things...... character I think it's called. These old boats are disappearing rapidly now that Arbroath no longer has a fishing industry and the harbour has been turned into a 'marina'. As Jim Royle would say... 'marina my arse'.
The top pic shows what the elegant man about the harbour is sporting these days. The de rigeur dress code appears to be quilted tartan shirts combined with scabby jeans, a highly appealing look I'm sure you'll agree. Certainly, I'm off to Primark tomorrow to get kitted out. Then I'll be able to hang out with the real men!
The flag is the RNLI (Royal National Lifeboat Institution) and between trying to catch it fully unfurled and asking those bloody seagulls to stay still, I had a tough job on my hands.
In the background of the bottom pic you can see the new visitor centre, a bone of contention amongst locals. I don't think they take too kindly to all this 'modern' design. I'll post some close ups at a later date. Personally I quite like it.
From : The Ship of Death
.... And the little ship wings home, faltering and lapsing
on the pink flood,
and the frail soul steps out, into her house again
filling the heart with peace.
D.H. Lawrence 1885 - 1930
For more Watery Wednesday posts click here
Posted by Neil Tasker at 18:50